It was 15 years ago on October 7, 1998 when, from a bar in Laramie Wyoming, two young thugs picked up gay University of Wyoming student Matthew Shepard and took him, under gun-point, to the outskirts of town. When they got there they brutally beat him and left him for dead. The Laramie Project, a hit play written by Moises Kaufman and members of the Tectonic Theatre Project of New York, explores, through the eyes and words of its own citizens, how this small otherwise peaceful community dealt with the aftermath of such a heinous crime.

Recovery Theatre of Brantford’s presentation, based on this award winning play, is itself a work of community — our community. Over the last 10 years, presentations of The Laramie Project have been used as a vehicle for community groups and communities to come together to examine the violent repercussions of bullying and homophobia. Remaining true to this tradition and to its mandate, Recovery Theatre has assembled an impressive list of community leaders and local residents from all walks of like to contribute to this production. Joining this cast of over 50, for example, is our Mayor Chris Friel, the Speaker of the Provincial Legislature and our sitting MPP Dave Levac, City Councilors David Neumann, Debbie Dingnan-Rumble, John Utley, Marguerite Cesni-Smith, Dan McCreary and Vince Bucci as well as various other local leaders and citizens from throughout the City and County. Together, they will participate in this dramatic reading of The Laramie Project. 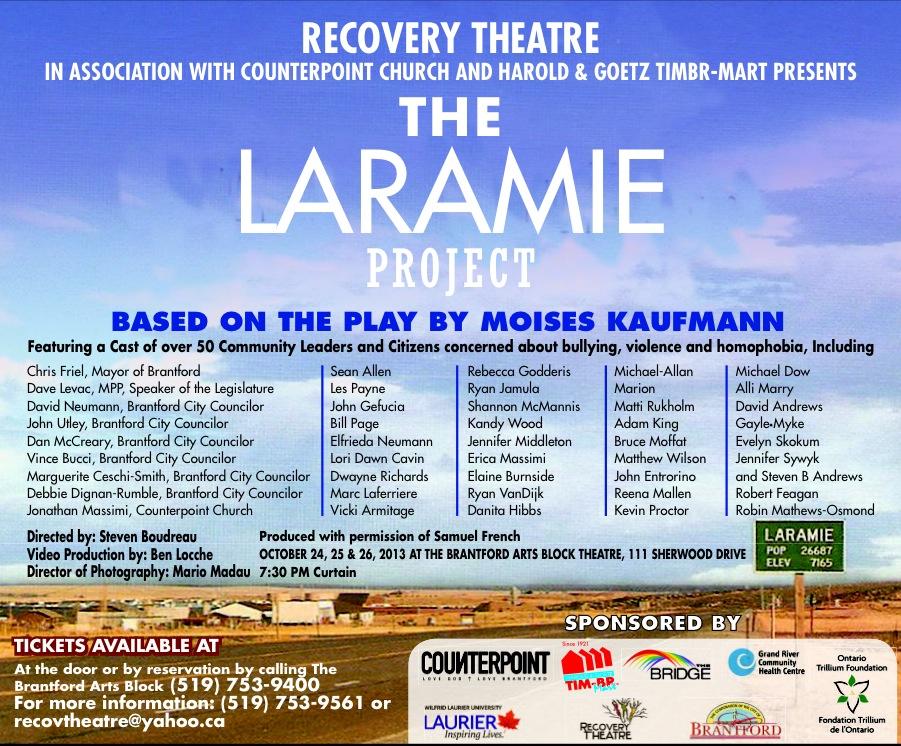 According to Steven Boudreau, the theatre’s Artistic Director, “The decision to produce this play goes back a couple of years. Some of us felt that we needed to respond to the steady stream of news stories that seemed to be popping up every couple of months about young gay teens that were bullied to the point of making them feel that suicide was the only course for them to take.” He added that “As a group, we were attracted to The Laramie Project because it of its community focused message. Bullying, harassment and homophobia are not simply the responsibility of any single group or individual, they are something that communities need to deal with together.”

In the interest of raising the profile of these important issues, each of the three, scheduled performance of this production, will be followed by a moderated panel discussion on a topic specific to our community concerning the issues of bullying, violence and homophobia. Production dates are October 24, 25 and 26 and the three panel topics will be 1) Education; 2) Religion and Spirituality and 3) Law Enforcement and Justice. Information on the specific tittles of these focus groups and who will make up the panel members and moderators will be forthcoming in a follow-up press release. All performances of The Laramie Project will be held at the Brantford Arts Block and they will begin at 7:30 pm. Tickets are $20 and will be available at the door the night of the shows, or before hand by calling the Brantford Arts Block at 519 753-9400.

Recovery Theatre’s The Laramie Project is generously supported by the City of Brantford and the Ontario Trillium Foundation and sponsored by Harold & Goetz Timbr-Mart, Counterpoint Church, Laurier Brantford, The Bridge Brant, the Grand River Community Health Centre and the Expositor.